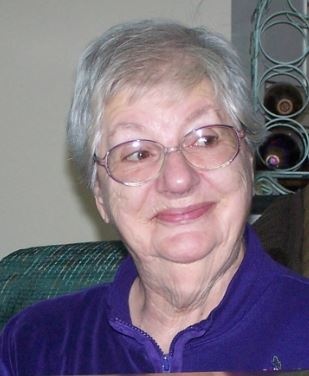 Mrs. Bargas was born on December 4, 1930 in Joliet, IL to Rachel and Edward Weber.  She graduated from Joliet Township High School in 1949.  After graduation, she went to work at Caterpillar Tractor Company in Joliet.   She married Samuel Bargas on July 21, 1956 and raised two daughters.  She worked for a short time at Silver Cross Hospital and retired from the American Institute of Laundering in 1990 after 15 years of service   She and her husband moved to Texas in 2000 to be closer to their daughters and to escape the IL winters.

Ruby was a kind and loving wife and mother and a happy and honorable woman.  She lived a long and full life with no regrets and was a lifetime member of the Ingalls Park United Methodist Church in Joliet.  She enjoyed eating out, people watching and going to sporting events.  She was an avid traveler and visited 38 of the 50 United States and 6 countries.  Her family will always remember her warm smile and her laughter as she watched the Johnny Carson and Carol Burnett shows.  She had a great will to live and survived two bouts of breast cancer and a terrible auto accident.  She is survived by her two daughters, Connie of Houston, TX and Carol of San Antonio, TX and numerous nieces, nephews, and cousins.  She was proceeded in death by her parents, her husband of 62 years, and brothers Clyde and Daryl.  She will be deeply missed by her family, friends, and all who knew her.

Although flowers are welcome, donations to the American Lung Association, American Cancer Society or Ingalls Park United Methodist Church in Joliet will also be appreciated.

To order memorial trees or send flowers to the family in memory of Ruby G. Bargas, please visit our flower store.