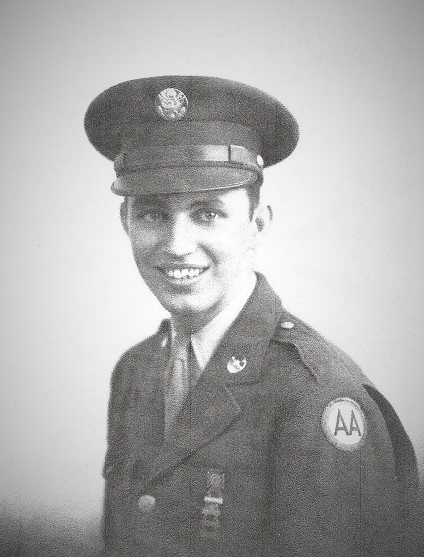 A beloved father, grandfather, great-grandfather and uncle passed away while in Hospice care after suffering a stroke on November 29, 2020 and having dementia.
Mead's most related memories were of his high school years playing the sousaphone in the Joliet Township High School championship marching band that traveled to California to perform. He was also a member of their concert band. While in high school, Mead worked nights as a clerk for the Joliet Post Office. He was drafted into the U.S. Army during his senior year of high school. He proudly served from 1943-1946 as a forward observer with the 17th Airborne unit in England, France, Luxembourg, and Germany in the Rhineland and Northern France Campaigns. Upon returning to the States, Mead returned to work at the Post Office and left his clerk job to become a mail carrier for the next 35 years. He took a disability retirement in 1981 after being hit from behind while in his postal vehicle. Many people may also remember Mead as an area drapery installer who worked for Sears, the Boston Store, Bergner's and Decor Interiors for over 40 years. Mead was also a proud pioneer member of the American Legion Band from 1946-1948. He was personally asked by A. R. McAllister for him and his brother to help get the American Legion Band started. As well Mead was also very proud to be a lifetime member of the Cantigny Post #367 VFW. In December of 2001, he was his awarded high school diploma along with those who were called to serve in WWII during their high school years.
You rarely saw Mead without being dressed up wearing a tie, dress shirt and trousers, sport coat, wingtips, and his beloved Glengary chapeau adorned with his WWII 17th Airborne patch and pins. Mead ate out three meals a day: breakfast was always at Louie's, followed by a late morning coffee and doughnut at the Donut Den, where he met with a great group of people, a late lunch at the Silver Spoon and dinner at a variety of local restaurants, many times with his daughter, Betsy. But Friday lunches at Al's steakhouse with his daughters, and his son when he was in town, was a must. Mead will be remembered by many as a wonderful, hardworking, handsome, and kind gentleman.
Mead was preceded in death by his wife of 47 years, Marian (nee Wilhelmi), in 1995, his parents James Howard Clark, in 1962, and Mary Ethelyn Clark Anderson, in 1974, his brother Elwin Clark, in 1980, and his son-in-law, Rob Denewellis, in 2006.
Surviving are his children Linda (Jim) Schultz, Betsy (late Rob) Denewellis, and Jeff (Kurt Dahl) Clark. Also surviving are his grandchildren Lisa (Don) Kos, Dawn (Brandon) Waters, Meg Denewellis, Dana (Brian Rzewnicki) Gregory, Jill (John) Shutes, Erin Denewellis, and Andrew and Ashley Dahl, along with 9 great-grandchildren and his nieces and nephews.
Visitation will be held Thursday, January 14, 2021 from 9 - 11 a.m. at the Blackburn-Giegerich-Sonntag Funeral Home. Masks must be worn and social distancing observed. A private service will be held at 11 a.m. Click here to join the livestream of the service.  Private Interment will follow at Abraham Lincoln National Cemetery.

In Lieu of flowers memorials to Cantigny Post # 367 VFW or the American Legion Band in Mead’s name would be appreciated.

To order memorial trees or send flowers to the family in memory of Mead H Clark, please visit our flower store.