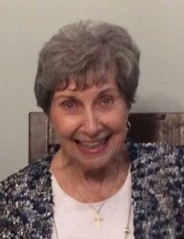 Jennie was born in Joliet on October 7, 1926, to Joseph and Rose (Duranto) Rizzo. She married Charles E.

Perkins on May 18, 1947 at the Catholic Church of St. Anthony in Joliet. He preceded her in death on November 18, 2009. Also preceding her in death were an infant son, Timothy, her parents and her siblings, Mildred (Richard) Peterson and Richard (Antoinette) Rizzo.

Jennie was a resident of Joliet her entire life, graduating from Joliet Township High School in 1945. She worked at Sears and Prairie State Paper Mill. She concluded her working years as Manager of Rivals Bowl, where she had first been employed as a secretary. She was a lifetime member of The Joliet Rivals Club. She enjoyed bowling and golf, participating in leagues for many years.

She loved hosting family gatherings on the holidays, gladly inheriting that responsibility from her Mother, Rose. She was a good cook and a wonderful hostess of cocktail and dinner parties. She was famous for her homemade pizza and lasagna. She took great pride in her children and grandchildren, attending countless baseball games and other activities.

Jennie was a great friend to many, a good listener, with genuine empathy for others. She was kind to everyone. She had a wide circle of "best" friends. A lifelong Catholic, she was a long-time parishioner at St. Paul the Apostle parish.

A public visitation will be held on Thursday, December 31 from 9:00 to 10:15 a.m. at BlackburnGiegerich-Sonntag Funeral Home, 1500 Black Road, Joliet, with social distancing and face covering requirements in effect, followed by a Mass of Christian Burial at 11:00 a.m. at St. Paul the Apostle Catholic Church. Burial will be at Resurrection Cemetery in Romeoville, IL.

Jennie's daughter, Patti, and granddaughter, Amanda, were her primary caregivers during her last illness. The family also wishes to thank her Hospice nurses, Georgetta and Cynthia. Memorials may be made to Joliet Area Community Hospice, 250 Water Stone Circle, Joliet, IL 60431. Online condolences may be made at bgsfuneralhome.com

To order memorial trees or send flowers to the family in memory of Jennie M. Perkins, please visit our flower store.