MINNICK, GLENN F. Age 76, at rest April 1, 2013 after a lingering illness with COPD. Lifelong Joliet and Crest Hill resident. Survived by his beloved wife of 43 years, Helen (nee Pasich), son Glenn of New York City, daughter Karen Carlsen of Clarksville, Tennessee and four grandchildren, Alexandra, Ryan and Jesse in Tennessee, T. J. Jackson of Indiana. Also survived by his brothers Kenneth, John (Terry), Calvin (Madge) and Roy (Nancy) Minnick. His sisters Jackie (Edwin) Lehner, Judy (Ron) Fowler, Debbie (Mike) Buske and Denise Johnson. Preceded in death by his parents John and Helen (Troutman) Minnick, daughter Sherri Minnick Jackson and brother Bob Minnick. A lifelong proud Marine, having joined the U.S.M.C. on his 17th birthday and served with the Fleet Marine Force Pacific. He was one of the last Marines on Iwo Jima in 1955; participating in the 10th Anniversary re - enactment of the landing in 1945. He is a Retired Life Member of Painters International, Life member of Marine Corp League, Member of the American Legion Post 1080, KSKJ Lodge #29. Member of St. Joseph Church, Joliet, where he ushered for 7:30 pm Sunday Mass for many years. He participated in a Pulmonary Research for 5 years at Hine V.A. Hospital. His pleasures and enjoyment was fishing in Wisconsin, watching the White Sox and traveling with his wife. A special thank you to Dr. R.W. Schubert and his staff for his special care throughout the years of his lingering health condition. Also to Joliet Area Community Hospice and the staff at St. Joseph. Visitation will be held on Thursday April 4, 2013 at St. Joseph Church in Joliet from 9:30 a.m. until Mass of Christian Burial at 10:00. Interment at St. Joseph Cemetery in Joliet. Donations to honor Glenn's memory may be made to St. Joseph Church, Joliet or a charity of the donor's choice in his name would be appreciated.

To plant memorial trees or send flowers to the family in memory of Glenn Minnick, please visit our flower store. 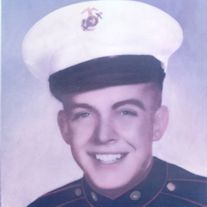