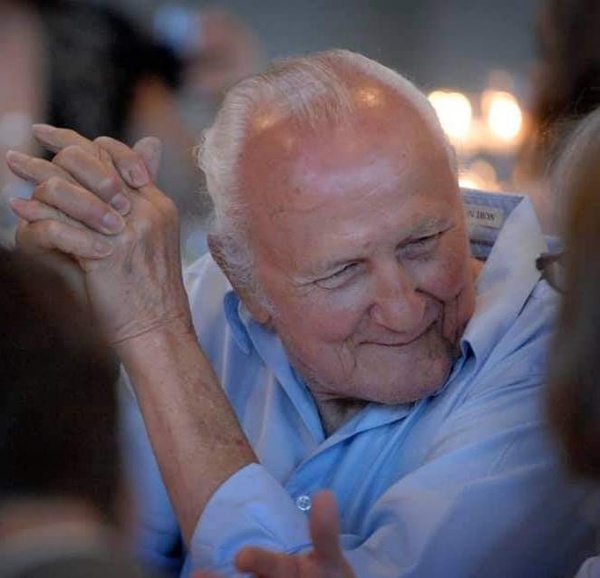 
Don Torrence was born in Plummer, Idaho on April 4,1934 at home in a house without running water or electricity. He left this earth on April 25, 2021 in Joliet, Illinois in his own bed with his beloved wife by his side. He did not want to die in the Illinois cold but was able to live to see the birds and buds of spring. Don was a progressive and an activist, a person whose thoughts, words, and actions were in alignment with deeply held beliefs about social justice and equality.

Don held a variety of jobs in his youth, first as a paperboy for the AM and PM editions of the Spokane Review. He bought a bicycle and a suit from those earnings but he lost them to older boys playing cards. He quickly developed a lifelong aversion to gambling. He mowed lawns, worked as a golf caddy and picked beans in Spokane Valley. He was fired from his job as a busboy for breaking too many dishes. This perhaps explains his nickname of Stumble Pete the Fumble Bum. In his teen years he also worked in cement sidewalk construction and continued his lawn mowing.

To finance his education at Humboldt State University, he worked at various times in a lumber mill, a Superior Coach bus factory in Lima, OH, and highway construction in Willow Creek, CA. In summers he returned to Spokane and worked at Kaiser Aluminum and at JC Penney as a shoe salesman. To continue his education at Washington State, he cleaned classrooms, held a position where he had to throw diseased cow carcusses into a furnace, worked as a dishwasher and cleaner at a sorority. To finance his master degree at University of Washington, he worked in the periodical room in the main library and delivered books to the various college libraries. In the summers, he put track in Alaska for the Fairbank to Anchorage route. He was a gandy dancer driving in the spikes for the lines. He also was in the Army Reserve, 6 months active duty, 6 years in the reserve.

After U of W, he joined the Peace Corp in 1962 and served mainly in Ibague, Columbia.  He established the basis for programs in basketball, baseball, and physical education. After returning from the Peace Corps, Don entered Northern Illinois University where he met students from all over the world and gained appreciation of different cultures and political orientations. They reinforced many of the concrete observations he made while serving in the Peace Corp. He especially commended Dr. Benjamin Keen for his integrity, scholarship, humility and his respect for those he mentored. He marveled at the brilliant mind  of Dr. Collins who shunned protocol and invited his graduate assistants to go fishing with him and enjoy a little libation. Don defended his dissertation and was awarded his doctorate in 1975.

He worked as the assistant director of a bilingual education program for Hispanic inmates at Stateville Correctional Facility. Don worked at Ser, Jobs for Progress. He developed and directed a Normalista program which permitted persons with teaching credentials from their respective countries to acquire an Illinois teaching certificate and BA. His last employment was as a probation officer first in Illinois and then in Washington state. He was proud of the work he did helping formerly incarcerated persons return to society and wrote pre-sentencing reports that explored the complexities of people’s lives.

A gifted and frequent writer to the Herald News, he made many of us grab a dictionary but also made us all think, learn, and question history and events.

Because Don was 87, he is preceded in death by many relatives and friends. Most recently missed are Bob and Wilma Torrence, Elliot Udland, Belleene Torrence, Louise Murphy, Mike Barker, and Erin Rockstrum.

Left to mourn and remember this truly great man is his wife Elaine (third time’s the charm) and his last surviving sibling Dave Torrence. His family includes his children Cole, Sara, and Kevin Torrence, and Jessica Schitkovitz, his stepchildren Benny (Kate) Oyemade, Sean (Esmeralda Clack), Stephanie (Victor) Salazar, and Katrina (Zafar) Khudayberdiev.  He was the cherished Bapa to Eliot (Navi) and Darion Chambers and a slew of little ones: Elliese, Kien, Zehira, Nazaray’ah, Eva’ah, Grace, Ian and Annabelle, Rufus and Beatriz, Layla and Jacob. Also missing Don will be his book club members Ron, Ed, Reed, and Sue and his Kent, WA 8 year street corner protest partner Phil. The entire Murphy-Samoy-Ancharski extended clan celebrated his inclusion into their family. They made a dream of seeing the Grand Canyon come true. He was Uncle Don to Patty (Bob) Barker, Jim (Barb) Torrence, Debbie Rockstrum, Rene (Eric Udland) Torrence and all their respective offspring.

Don was a man who wanted us to see beyond our own family, tribe, and country to embrace the world and all its inhabitants as our family. He wanted us to care about persons outside of our comfort zone, to ache when a person anywhere is killed, starved, or drowned. And then he wanted us to do something about it.

Thank you to his care team at Advanced Urology Associates especially Thomas Burns MD who gave us 8 more years together, Tasha APN and Ryan PA, Paul DesRosiers MD, and notably Ellen RN who held our hand as we walked into the dark. We thank Sunil Narula MD of UChicago Medicine at Silver Cross Hospital who gave us truth but also hope. Thank you to Joliet Area Community Hospice. Our time there was brief, but they helped Don make a smooth and peaceful transition. Thank you to Rayna Brophy of Blackburn-Giegerich-Sonntag Funeral Home for her loving treatment of Don’s remains and kind treatment of his family.

At a time in the future, when we can safely gather to eat, laugh, cry, and perhaps toss back a cold one, there will be a celebration of Don’s life. Memorials in his name can be made to the Poor People’s Campaign (poorpeoplescampaign.org) or the Joliet Area Community Hospice (lightways.org).

To order memorial trees or send flowers to the family in memory of Donald Ray Torrence, please visit our flower store.