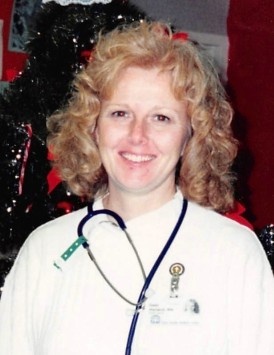 Preceded in death by her parents Don and Beverly Zola; father and mother-in-law Allen William and Helen Kathryn (Gardner) Heiland.

Debi grew up in Ingalls Park on Peale St.  She attended St. Mary Magdalene School and graduated from Joliet East High School Class of 1974, where she was very active, including cheerleading.   Debi wanted to be a school teacher but her counselor suggested a nurse, so nurse it was.

She graduated from St. Joseph School of Nursing, Class of 1977 on Sunday and began her 44 year career on Monday at St. Joseph Hospital, 7th floor and finished in Pre-Surgical the last 21 years.  Before finishing school, Debi and a close friend were going to join the military and become Air Force nurses, but her friend become pregnant so she started at the hospital.

Debi was a social person, very independent and somewhat of a handywoman who could fix most things, except cancer.

Scott hit the jackpot with a great problem solver, cook and handywomen.   On September 15, 1984 they were married at St. Mary Carmelite Church downtown Joliet.  Together they lived in the same home that was built in 1983.  Debi and Scott raised two boys, 17 months apart who kept them very busy with their activities of band and sports.  Debi and Scott were active at Troy Baseball for many years, Troy and Joliet West Band and athletic boosters.   Debi loved vacationing in the Smoky Mountains.  They resumed their vacations 2 years ago after a long vacancy.   After her scheduled retirement, July 1, 2021 she wanted to travel to as many National Parks and major league parks as they could.  Mostly Debi and Scott were a stay at home couple.  Family was first and she loved cooking for them, especially around the holidays.

Debi liked the Cubs when they won, loved fishing, going to estate sales and reading on her deck.  Aside from family she loved being a nurse and working upon the floors.  Everyone was close up there and socialized when they weren’t there.  She also enjoyed her time in Pre-surgical.

This women will leave a large void to many.   Debi will leave empty hearts that cannot be filled, so Deb help us.  God Bless you Deborah Rae, you truly will be missed and loved by the many lives you touched.

Thank-yous are in order for the extremely excellent care Debi received.   JOHA, St. Joseph 4-East, 5-West and final comfort care from Hospice who would do anything you asked of them for patient and family.  Their employees go above and beyond.  God Bless you.  We also want to thank JD Brown and Kathy at Blackburn-Giegerich-Sonntag Funeral Home.

Debi’s wishes are cremation and arrangements will be private.   Donation in Debi’s name to Joliet Area Community Hospice would be appreciated.

To order memorial trees or send flowers to the family in memory of Deborah Rae Heiland, please visit our flower store.