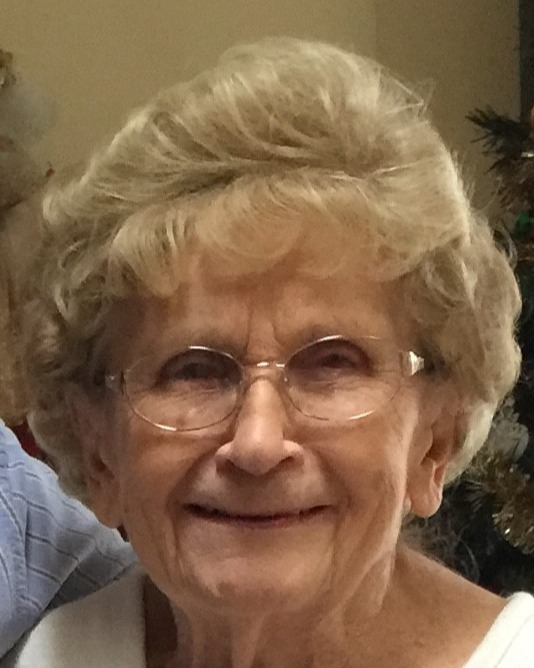 Hand delivered by a local florist

Anita B. Goss, 95, died October 15, 2022, at Our Lady of Angels Retirement Home in Joliet.
She was born in Joliet July 11, 1927, to Joseph and Mary (née Mizanin) Komar. Mary died in childbirth, and Anita was adopted by Mathew and Anna (née Rusina) Hayurka. She grew up in the former Slovak neighborhood around SS Cyril and Methodius Church. She graduated from SS Cyril and Methodius Grade School and Joliet Township High School and attended Joliet Junior College for one year.
She was working at Gerlach-Barklow calendar factory when she met Richard J. Goss, whom she married in 1948. They raised their family of four children in Rockdale and were active members of St. Joseph Church there. Mrs. Goss was involved with the parish Council of Catholic Women for years, including as president and secretary, and was chosen its Woman of the Year.
A homemaker throughout her marriage, Mrs. Goss always kept busy with the usual domestic duties and everything from sewing to remodeling. An expert seamstress, she worked part-time for a while altering clothes at Wolfson’s in downtown Joliet.
After almost 50 years in their Rockdale home, she and her husband in 2002 moved to a new condominium development off Caterpillar Drive in Joliet, where they resided until moving to American House assisted living in Plainfield in 2019. They felt fortunate to live long enough to enjoy their grandchildren and great-grandchildren. Mr. Goss died in December 2019 after a brief illness.
Mrs. Goss moved into Our Lady of Angels in December 2021.
Surviving are her three daughters, Marianne, Patricia and Nancy (Robert Lonsinger); their son, Richard M. (Jeannine); four grandchildren, Sarah (John) Nolan, Matthew (Tracy) Goss and Alex and Ashley Lonsinger; two great-grandsons, Alex and Dominic Nolan; in-laws Marilyn Goss and George and Lois Goss; many nieces and nephews; and dear friends Jeanie Pavnica and Maryrose Martin.
She was preceded in death by her husband, her parents and siblings Irene (Sister Mary Salome), Velma Buczek, Peggy Bailey, Sister Mary Komar, Joe Komar and Ben Komar.
Visitation will be at Blackburn-Giegerich-Sonntag Funeral Home, 1500 Black Road, Joliet, from 9 a.m. to 11 a.m. on Thursday, October 20, 2022. A funeral mass will follow at St. Joseph Church, Rockdale, at 11:30 a.m.
She will be buried next to her husband in Resurrection Cemetery.
In lieu of flowers, donations may be made to St. Joseph Church, Rockdale,  Our Lady of Angels Retirement Home or Lightways Hospice.

To order memorial trees or send flowers to the family in memory of Anita B. Goss, please visit our flower store.